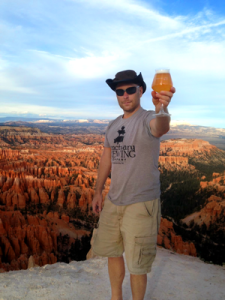 Gary Glancy has been passionate about craft beer since long before it became cool. While his college buddies were knocking back 12-packs of the cheapest stuff they could find during Gary’s infamous backyard parties, Gary and his friend Matt would pour a Sam Adams Boston Lager or Sierra Nevada Pale Ale into a glass and ignore the taunts as they savored each sip of these cutting-edge brews.

That passion never waned. As an award-winning journalist – including for his coverage of the Upstate South Carolina beer industry – Gary reached a point where he knew he had to follow his calling. So, he left his job as a full-time reporter for the Hendersonville (NC) Times-News and ventured out on a six-week solo road trip across America, visiting many of the national parks and breweries on his bucket list (including Sierra Nevada, New Belgium and Oskar Blues’ original breweries out West), attending the Great American Beer Fest in Denver for the first time, and filming a parody of Forrest Gump’s cross-country run that would launch an annual fundraising film fest for the Humane Society.

Upon his return, Gary went to work pursuing a career in craft beer, becoming a tour guide and bartender while continuing to cover the industry as a freelance writer for several local and national publications. He also continues to travel the country in search of soul-nourishing hiking trails and rare, world-class beers that eventually find a home in Gary’s ever-growing beer cellar.

In 2014, Gary also became one of a handful of beer professionals in the region to achieve the elite status of Certified Cicerone, which is considered the beer equivalent of a sommelier for wine.

Known for his ability to educate people about beer in a fun, engaging and down-to-earth way, Gary looks forward to passing on his knowledge and passion to guests of The Brewery Experience.